Key Learnings from Carillion Collapse | NED on Board 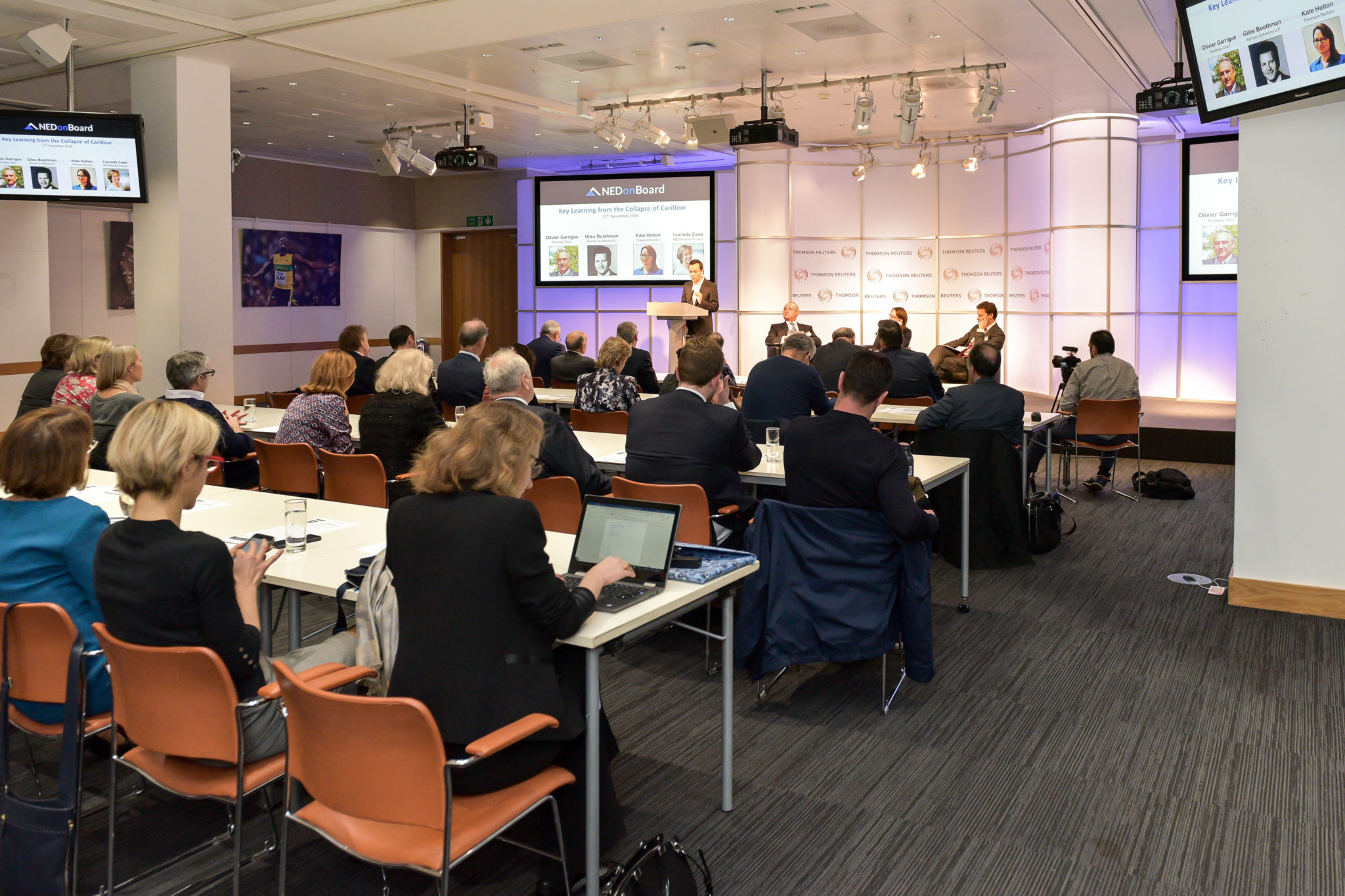 Lucinda Case, Managing Director of Thomson Reuters UK & Ireland Legal and trustee of the Council of the Royal Albert Hall, opened the event by welcoming NEDonBoard and the panellists. In her experience as a trustee, Lucinda pointed out how difficult sometimes it is to navigate extensive board information packages and to strike the right balance between, on the one hand, being challenging and getting involved into the details and, on the other hand, leaving the “experts”, (ultimately, the executives), getting on with their job.

We have summarised below some of the key learnings from the Carillion collapse outlined by the panellists.

At least five elements should have triggered debates in Carillion’s boardroom. Kate Holton listed the use of suppliers as a source of financing, the increase in dividends distributed to shareholders when cash flows were down, the low profitability of new contracts, the breadth and complexity of Carillion’s operations and the high compensation of senior management.

There are circumstances in which directors may decide to approve dividend payments to maintain investor confidence, even if cash flows are decreasing. In the case of Carillion, the board of directors approved the payment of dividends while profit warnings were issued, cashflows were down and there was a lack of visibility over the cash generation, given the tight margins at which new contracts were gained.

The question is, can any board be able to oversee such a large and diversified business and take the appropriate decisions?

According to Giles Boothman, the skills required in the boardroom vary depending on the stage of growth at which the company is. The board collectively (not the shareholders) needs to recognise this. Different director skills are needed in different phases of the company life cycle. While some directors are suited to a high-growth environment or to an IPO, others are better equipped to deal with the challenges that arise in a more mature phase. Giles Boothman further outlined the role of boards and chairs in identifying the skills needed in the boardroom, which should be in tune with the stage of the relevant business life cycle of the company. Boards need a blend of people and, in any case, they need directors who are able to understand, and can deal with, cash-flow management.

Based on his extensive experience in dealing with boards at critical stages, Giles Boothman reported that, broadly speaking, there is often a lack of skills at board level. The unfortunate collapse of Carillion has had the merit to raise awareness of directors’ duties and liabilities and highlighted the importance of non-executive (NED) training and professional development, such as that offered by NEDonBoard. There is no difference in liability between NEDs and other directors. They all have the same fiduciary duties to act in the best interest of stakeholders (which means shareholders in the good times but also creditors in the critical times). There is a stronger understanding that NEDs can suffer damage to their reputation, as a result of their course of action or inaction, in addition to facing potential liabilities. This supports the increasing need to professionalise the NED role.

The position of Carillion’s NEDs

In addition to lacking the right combination of skills, Giles Boothman stated that the board of Carillion may not have asked the right questions about the company’s dividend distributions, acquisitions, new contracts or accounting policies.

The Business, Energy and Industrial Strategy (BEIS) and Work and Pensions Committees report pointed out that one of the NEDs questioned senior management but was isolated and their questions did not result in meaningful debates and corrective actions. Carillion’s NEDs went with the consensus, did not challenge the information they received and did not interrogate the executives or their advisors to form an independent view and take courageous decisions. Olivier Garrigue advocated for NEDs to be inquisitive and seek to access all the information they need to inform decision making, even if this means engaging into discussions with divisional and operational managers.

A Board of directors needs diversity

One question that was raised was the lack of diversity at Carillion’s board. Non-executive directors tend to have similar background and go with the consensus. Olivier Garrigue added that diversity was not only a matter of gender creed or skin colour but more importantly one of skill competence, communication and decision-making style complementarity among all board members.

The collapse of Carillion has also highlighted the role of procurement

Olivier Garrigue mentioned that the collapse of Carillion was a combination of many factors that compounded risk and raised the particular issue of how procurement is performed, as short-termism typically prevails and the lowest bidders are usually awarded new contracts. This depresses margins far too much and does not allow for much contingency. Kate Holton said that the UK government was one of Carillion’s largest clients. Pursuing its own austerity agenda, the government contributed to squeeze in margins that resulted in Carillion winning unprofitable multi-year contracts. The UK outsourcing sector is under pressure with players such as Capita and Interserve having issued several profit warnings. Brexit may increase the challenges that the sector is currently experiencing given that companies and the government may be even more reluctant to enter into such big procurement contracts.

External stakeholders such as the government, financial institutions and auditors supporting the company also had an important and influential role to play in the run up to the collapse of Carillion.

NEDonBoard thanks Olivier Garrigue for chairing and actively contributing to this lively discussion, Kate Holton and Giles Boothman for their insights into the collapse, Lucinda Case, our host from Thomson Reuters and the event’s attendees for their contribution to the discussion.

We would love to meet you at one of our NEDonBoard Events: https://www.nedonboard.com/events/

Your opportunity to contribute
April 3, 2020

Protecting the C-Suite and the Boardroom from Cyber Risk, by Aon
March 30, 2020

An investor’s letter to its shareholders
March 12, 2020

Protect yourself as a NED: dealing with criticism and vilification
February 27, 2020
Leave Comment