Highlights of our conversation with Sir Win, Chairman of the FRC on 17th October | NED on Board

Highlights of our conversation with Sir Win, Chairman of the FRC on 17th October 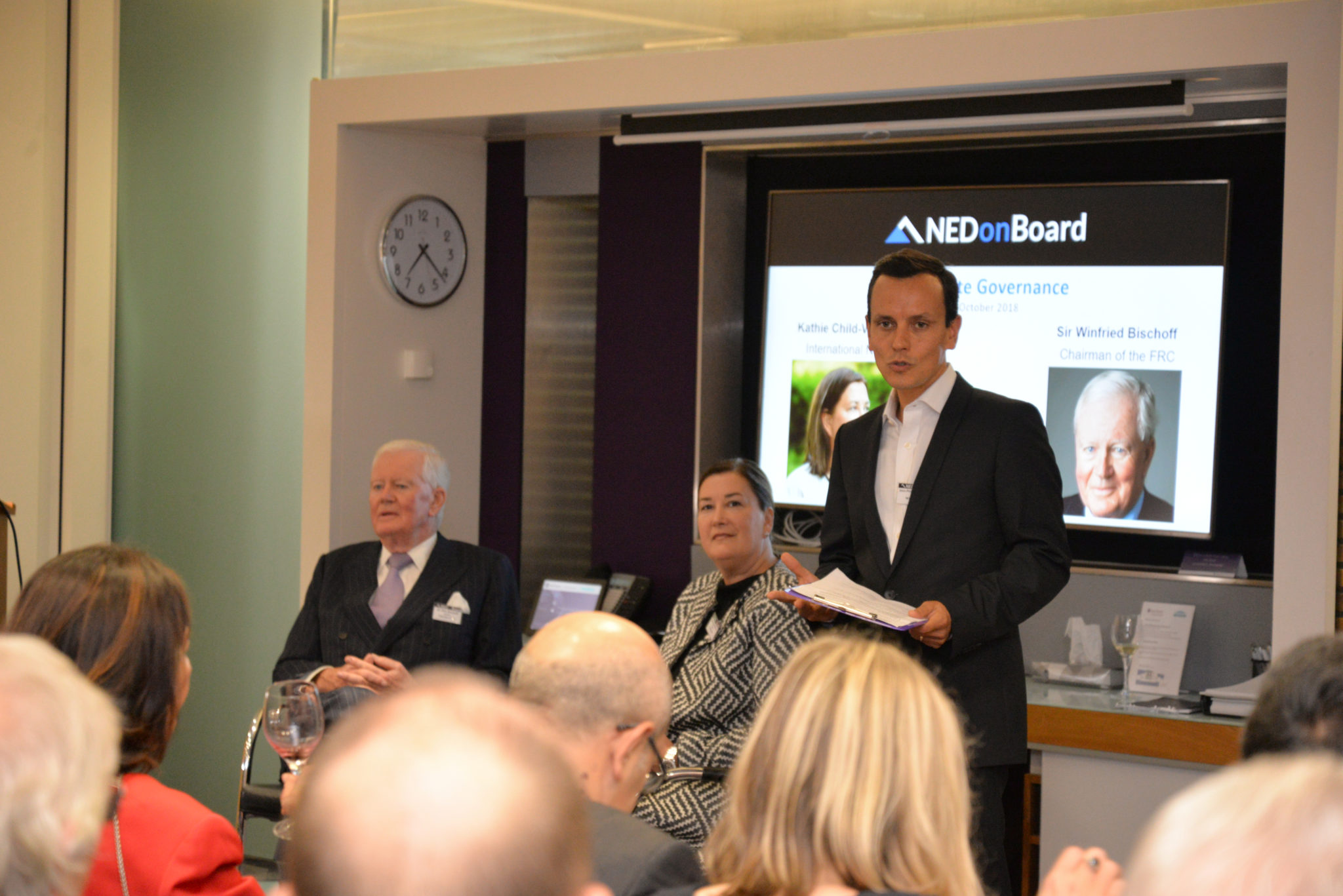 NEDonBoard had the pleasure to welcome Sir Win Bischoff, Chairman of the FRC for a discussion with our members on the recently published UK Corporate Governance Code. The conversation was facilitated by Kathie Child-Villiers.

In this blog post, we outline a few of the topics that were covered during the conversation between Sir Win and Kathie Child-Villiers. Next week, we will outline some of the conversation topics raised in the audience.

Sir Win provided an overview of the corporate governance code and summarised some of the key changes.

Sir Win recommended the audience to read an article published in the HBR in April 2017 from Professors Joseph Bower and Lynn Paine that challenge the agency theory and propose an alternative model that has at its core the health of companies rather than near-term returns to its shareholders.

Kathie Child-Villiers came back to the provisions vs. principles aspect of the new Code and asked Sir Win to comment on the trend in the auditing profession that appears to have moved to a “tick the box” approach to auditing, as opposed to judgement.

Sir Win said that NEDs play an important role in supporting management and must also exercise a good degree of scepticism. He advocates for the same logic to apply to auditors. He believes that some of the things that have gone wrong within the auditing profession is because of a lack of scepticism.

While auditors may be contributors to some of the recent collapse, the primary responsibilities are with management and the board as well as the business model of the company.

There is a high number of individuals involved in the audit of large companies. They have different seniority levels and interact with different departments/divisions and layers of the companies. As such, the auditors should have a good idea of the company culture and of the business model.

Kathie Child-Villiers asked Sir Win for his view around the application of best practices in smaller companies.

If you are an-AIM listed company, how do you balance best practices with their operational constraints? Best practices may be expensive to implement, and it is a challenge for smaller companies to know where to draw the line.

While every company should aspire to corporate governance gold standards, this is typically not what happens. The FRC and the FCA allow IPOs to take place without companies complying with all provisions of the Code. But companies’ intention to comply over a set period is a key element to proceed.

Sir Win highlighted that standards of corporate governance code are applicable to every company.

All NEDs are important, but Chairs are even more important as they lead the board and support the CEO. If the FRC believes that a 9-year is the right tenure for NEDs, then this should also apply to Chairs. However, this may not be possible for succession planning.

Sir Win highlighted an interesting fact around the appointment of a chair in that chairmen are typically appointed by a search consultant while chairwomen are more often appointed after having served on the board for 3 to 5 years. The problem is that if the term is capped at 9 years and includes the years during which NEDs have served on the board, women are far less likely to be appointed as their tenure as chairs will be limited.

The code “comply or explain” approach allows companies to have a longer tenure than 9 years provided that a good explanation is provided.

NEDonBoard thanks Sir Win and Kathie Child-Villiers for their contribution to an insightful and well-attended event.

The event served as a reminder to our community to highlight the publication of our NEDonBoard Succession Planning, Board Best Practice® document (https://www.nedonboard.com/board-best-practice-succession-planning/) which outlines some of the key areas that Nomination Committees should consider.

We remind our readers that NEDonBoard contributed to the consultation on the new Corporate Governance Code. Our comments can be found here (https://www.nedonboard.com/response-to-the-uk-corporate-goverance-code-consultation/).

Not yet a member?  Take a look at our website and find out the many benefits of becoming part of the NEDonBoard Community.