Are you a mentor or a non-executive director? | NED on Board

Are you a mentor or a non-executive director? 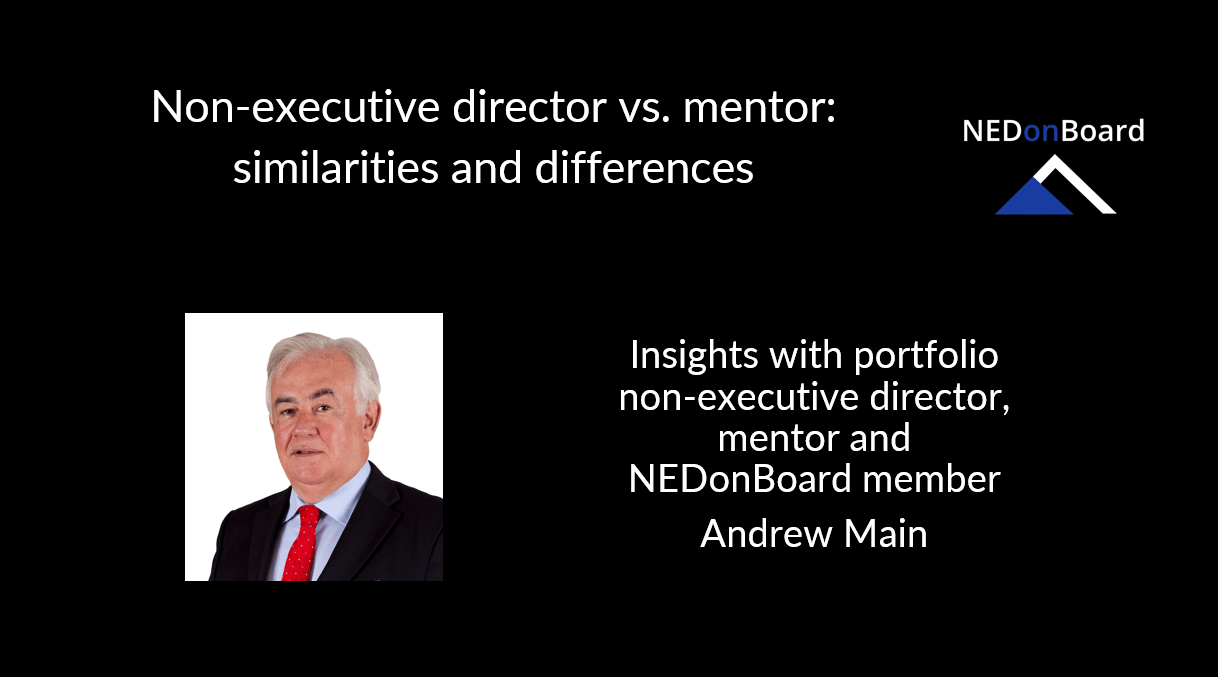 The last two years in the UK has seen an explosion of new company activity. Many individuals have decided to change their whole lifestyle and give up the corporate world in favour of becoming an entrepreneur.

Some of the fledgling activities are beginning to turn from being an initial “hobby business” into a small business. This tends to come with the hiring of staff or the decision to not go it alone but commence working with business partners. My local town has seen an increase in short-term office provision as fledgling entrepreneurs take their first steps.

What is the difference between mentorship and non-executive directorship?

Both have their place in the corporate world, but each provides a similar but different service.

The mentor will typically be supporting the development of a key individual (for example an executive).

His/her role will be to LISTEN to the mentee and offer trusted sound advice in supporting the development over the long term. The mentor may well set short and long-term goals as the mentee’s activities and responsibilities grow. With this growth will come greater challenges by the mentor to ask the mentee to think more deeply about personal development and how they deal with new situations they find themselves in during business growth pains. A good mentor should not tell them what to do but help them conclude the best way to do it. They may plant the seed, but the mentee will need to nourish it to fruition.

The non-executive director (NED) is there for the company and not for any one individual.

He/she is there to be a non-executive and offers counselling and advice but not in the ‘hands on’ fashion of an executive. (A habit which given his/her past business activity may be difficult to differentiate.) The NED is here to set and develop the corporate governance of the organisation. This in turn will build the corporate brand. The NED should be the ultimate person to whom a whistle-blower can turn in an organisation without fear of recrimination. He/she needs to be available to all and be prepared to LISTEN to all as the business grows or looks to overcome hurdles in its development. The NED holds official company directorship and has associated duties and responsibilities.

As an outsider coming in on a regular basis, the NED will concentrate the minds of the senior executives in the business to prepare for the next board meeting. These meetings are then more likely to happen and not be put off at the last minute. They are more likely to tackle the difficult issues that otherwise may be left to sort themselves out. Every business has growth pains and it’s important to “lance the boil” and seek a way forward that maintains the Company’s values and beliefs. The NED should be offered designated space, support, and budget in order to do the job properly. He/she should be fully prepared for what is on the agenda for the meeting and should be able shine torches into the dark corners that need exploring.

So, you can see there are many similarities but differences between the roles of a mentor and a non-executive director. To me acting as a NED, it is thinking about the company as a person rather than the actions of an individual in a company who I might be mentoring. In both roles, guidance and direction may be given. Your own address book and contacts maybe utilised but in different ways. It is the diversity of both mentoring an individual and acting as a non-executive which makes the work not only interesting but challenging. You never quite know what challenges the next day may bring.

Andrew Main is the former founding Managing Partner of Stratton Street Capital from 2000 to 2014. This fund management business grew from nothing to managing over £1BN. Previous to this he was a main Board Director of a London Merchant Bank, Guinness Mahon & Co Ltd where he headed Capital Markets and Treasury. Subsequently Andrew has worked with a number of family offices in Asia and works with a fiduciary group in Isle of Man. He retains board positions in Cayman Islands and Mauritius and is a governor of the Mount Kelly Foundation as well as a trustee of Tavistock Heritage Trust. In 2022 Andrew joined the International Trade Group of the Institute of Directors as part of the team to support development of Trade with Japan.

Non-executive directors can play a crucial role in managing crisis

New to the NED role? We encourage you to watch our webinar How to secure your first NED role (registration link).