Pension scheme trustee and non-executive director | NED on Board

Adding a non-executive role to a pension scheme trustee portfolio 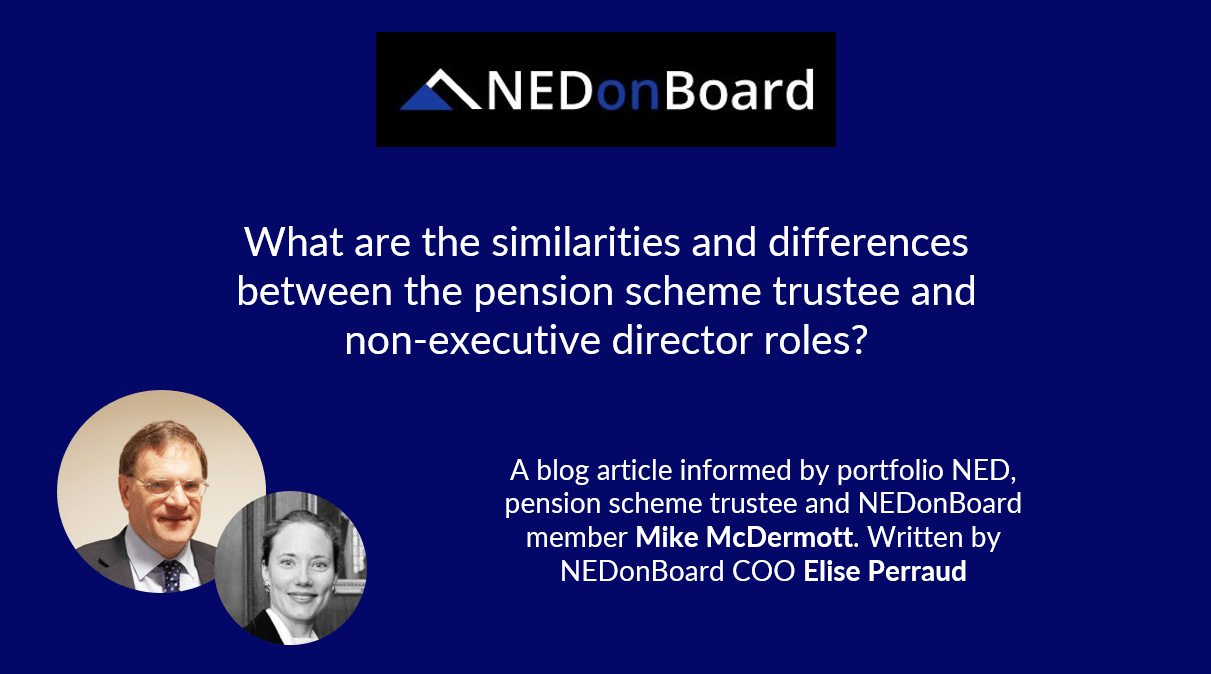 The trustee board is responsible for the governance of the pension scheme. The board has a duty to ensure that fit-for-purpose processes, systems, people, and procedures are in place to manage the scheme, its investments, and risks. Pension scheme trustees are there to act in the best interests of scheme members.

Boards of directors are responsible for the governance of their companies. As per the UK Corporate Governance Code, boards “promote the long-term sustainable success of the company, generating value for shareholders and contributing to wider society”.

Pension trustees are responsible for the proper running of the scheme, from the collection of contributions, to the investment of assets and payment of benefits.

What are the similarities between the roles of non-executive director (NED) and pension scheme trustee?

Both roles are guided by codes of governance and carry a duty to act in the best interests of your pension members or stakeholders in a company. Financial matters are important in both roles: while boards approve the accounts, pension trustee boards review the position of the schemes and make decisions on their future. Non-executive directors and pension scheme trustees are accountable for the proper running of their organisation.

Conflicts of interest need to be dealt with in all non-executive roles. Potential conflicts must be declared and dealt with promptly.

“Conflicts of interest may be more prevalent in pension funds as many trustees are also employees of the sponsoring employer and may have funds within the pension scheme itself.”

What are some important differences?

Pension scheme trustees are concerned with the pensions that the members receive. They look at achieving the best return on investments for their members. Financial and numeracy skills are crucial to be an effective pension scheme trustee as there are some technical financial elements such as the actuarial calculations. While non-executive directors also need an understanding of financial matters, the role typically requires less technicality.

Pension scheme trustees may be more reliant on their advisors than non-executive directors, particularly in smaller schemes. Pension advisers provide advise with regards to investment and actuarial assumptions and calculations.

The composition of boards and considerations around diversity are also differences:

To which extent does a NED role complement a pension scheme trustee role? Does being a non-executive role helpyou in being more effective as a pension trustee?

What recommendations for pension trustees wanting to transition to non-executive directorship?

“Use your time in the pension scheme boardroom wisely. There are a lot of similarities. You need to be capable of analysing the board papers and the financials. You should also keep your training and CPD up to date and be prepared to participate and challenge”.

Mike McDermott is an experienced chair and non-executive director, currently sitting on the board of Jigsaw Homes Midlands, which is part of the Jigsaw Homes Group. He is also a trustee of a pension scheme (Melton Mowbray Building Society Pension Scheme) and a governor of a secondary academy. His previous board experience includes chair of a pension scheme and a non-executive director and chair of a building society.

The interview was facilitated by Elise Perraud, NEDonBoard COO who authored this article.

Differences and similarities between commercial NED and trustee roles

Is a non-executive director the same as a trustee?

New to the NED role? We encourage you to watch the NEDonBoard webinar How to secure your first NED role (registration link).