Non-executive portfolio combining trustee and commercial NED | NED on Board 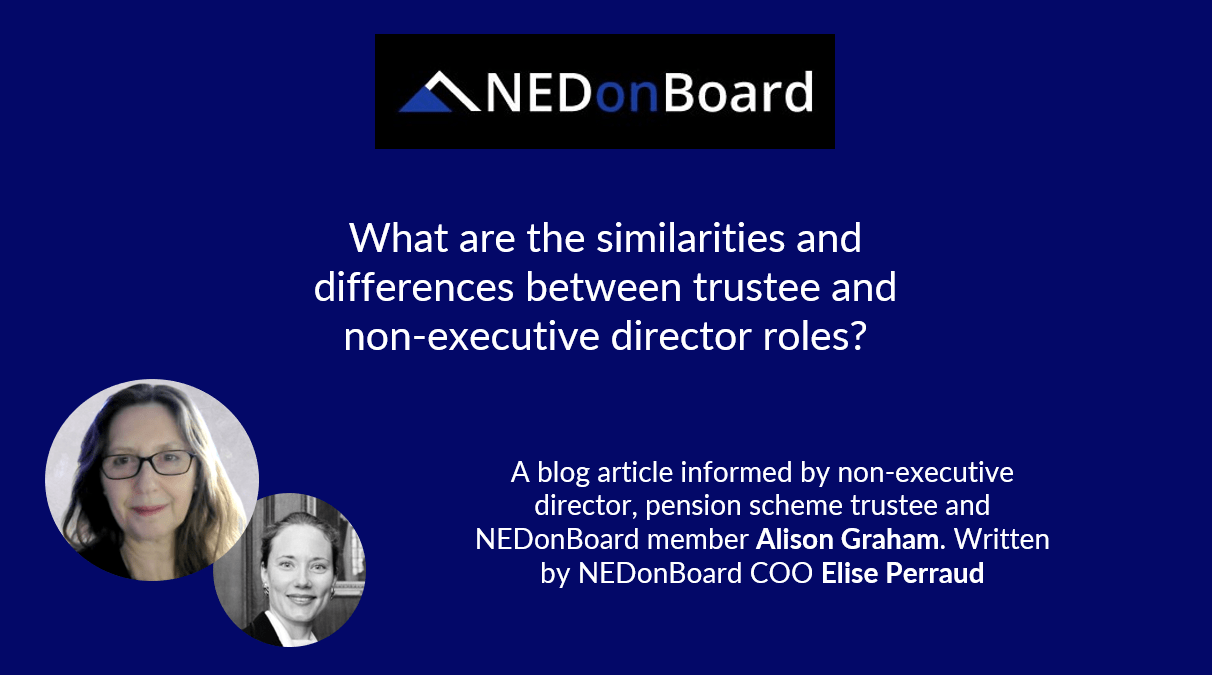 In this blog article, NEDonBoard explores the role of a trustee and outlines the similarities between a trustee role and non-executive director role. Elise Perraud interviewed Alison Graham to assess her personal views on the opportunity for, for example, a pension scheme trustee (or a charity trustee) to transition to a non-executive directorship role.

What are the similarities between the roles of a non-executive director (NED) and a pension scheme trustee?

There is an important overlap in skills needed between a trustee and a non-executive director. Both roles have fiduciary duties and comparable responsibilities with regards to strategic planning and oversight of strategy implementation and risk management. Independence of mind and character are key to discharging your duties whether you are a trustee or a NED.

“Both NED and trustee roles give you experience and practice in probing carefully, intelligently and appropriately, in exercising judgement and in thinking independently. If you hold more than one type of role at the same time, albeit on potentially different subject matters, the skills are noticeably transferrable: you hold the executives to account and oversee delegated responsibilities, you consider planning and strategy and monitor how the organisation is meeting its obligations and the goals that have been set.”

What are some important differences?

The main differences stem from the implications of the different legal and constitutional frameworks involved. The trustees are the personal legal owners of the organisation’s assets – they are personally responsible for them and for achieving the organisation’s particular purpose which is, importantly, for the benefit of someone else (e.g., within a trust based pension scheme, for the benefit of the scheme’s members). These factors generate the key differences.

Directors are appointed to oversee the responsibilities and operations of a separate legal entity within which the assets and liabilities are ringfenced. In a trust based framework there is no separate legal personality – contracts are held in the name of the trustees and liability to third parties does not have the protection of the ‘corporate veil’, unlike the directors of a limited liability corporation.

Also, while conflicts of interest always need to be clear and managed, they may, depending on circumstances, tend to be more prevalent on a pension scheme trustee board than on a corporate board. For example, you may be a pension scheme trustee and a director of the sponsoring company, which creates a potential conflict while, also at the same time, be a beneficiary of the scheme and an employee of the sponsoring company, nominated either by the employer or by members.

To what extent does a NED role complement a pension scheme trustee role? Does being a non-executive director help you in being more effective as a pension trustee?

What recommendations for pension trustees wanting to transition to non-executive directorship?

There is a risk of overboarding and spreading yourself too thinly if you develop a portfolio career that may include an executive position and a few board positions as a trustee and NED. You may have to turn down opportunities to ensure that you are in a position to discharge your duties and commit the time necessary that each position deserves.

“Asking yourself why you are, or why you want to become, a trustee or NED is important. Be clear on your ‘why’ and understand the risks associated with the role. If you are not totally committed to the  purpose of the organisation for which a trustee role is advertised, step back”.

Alison Graham is an experienced governance practitioner and a Fellow of the Association of Chartered Certified Accountants.  She currently holds the role of Company Secretary for Baillie Gifford & Co, is the non-executive Chair of Baillie Gifford International LLC, a non-executive Director of Baillie Gifford Fund Services LLC and a Trustee of Baillie Gifford’s Defined Benefit Staff Pension Scheme. Alison has also held a range of previous voluntary iNED, trustee and other governance related roles in organisations of various sizes and constitutional structures in the charitable and not-for-profit sector.

The interview was facilitated by Elise Perraud, NEDonBoard COO who authored this article.

Adding a non-executive role to a pension scheme trustee portfolio

Differences and similarities between commercial NED and trustee roles

Is a non-executive director the same as a trustee?

New to the NED role? We encourage you to watch the NEDonBoard webinar How to secure your first NED role (registration link).